Welcome to my first posting in my first blog! I will populate this blog with short, succinct essays, ramblings and other offerings about little known aspects of space exploration by humans. They will include questions I have always wondered about, and--if available--answers, so you won't have to wonder.

A life-long space nerd, I am lucky enough to work in the best possible field (space life sciences) in the best possible location to indulge myself: NASA's Johnson Space Center, near Houston, Texas. Even after three decades here, every meeting I go to, every lunch in the cafeteria, every walk across the center puts me in the offices, conference rooms and footsteps of the heroes of spaceflight: the astronauts, engineers, physicians, scientists and technicians who gave America and the world some of the proudest moments in human history--and some of the most crushing sadness.

After deciding to start this blog, I made a list of questions and topics that seemed like a fun set with which to begin (in no particular order, and with no promise of completion): 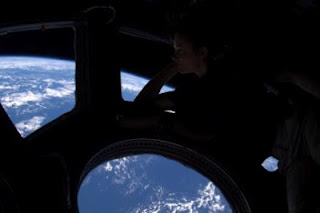 Part of my motivation is to celebrate the trivia of the space age: the endless list of questions no-one thinks about because everyone already "knows" the right answers--even if they really don't. The trivia fleshes out the bare bones of spaceflight, and shows us that this supposedly impersonal, technocratic science-factual undertaking is a truly human adventure, with drama to match anything in science fiction.